Jamie Miller has been training in urban Combatives for over 10 years he is a first-generation UC instructor and main representative in training coordinator for UC-UK. He has a vast martial art background and has studied boxing, Thai boxing, ju-jitsu, MMA, JKD and Kali under many well-known respected instructors. Jamie is also a certified personal trainer specialising in strength and conditioning. Having a background in gymnastics he understands natural He continues to Cross-Train in martial arts and other self-protection related methods, to supplement his Combative Training and enhance certain physical and mental attributes. His athletic base is immediately evident when you see him move. Jamie’s UC is outstanding and he is extremely innovative in drill designed and training kit ideas. He currently works with Lee teaching on the international seminar circuit. Working with civilians, security, law enforcement and military groups right up to the highest level of elite special forces. He has taught independently in Holland, France, Germany, Italy, Austria, Czech Republic and Slovakia as well as the US on several occasions. Jamie runs a weekly class on a Thursday Evening in the Leighton Buzzard area and is available for private tuition and group workshops/seminars.

Daniel Morrison is a First Generation Full UC Instructor and has been training since he was 10 years old in a myriad of martial arts. Dan as present throughout the entire growth of UC and understands the essentials of pure Combatives very well. Dan an assistant instructor at our UC Wednesday night class and is available for private tuition, workshops and seminars.

Tom Fryer is a First Generation Full UC Instructor. Tom is considered the raw caveman of UC and is available for private tuition in the basic UC curriculum, our barebones combative program and all elements of COM-FIT combative fitness training and routine design. Tom has experience on the international circuit as part of the UC team. Tom is based in the Tring, Bedfordshire and is available for private tuition on request.

Dave Stevens is a Third Generation Full UC Instructor. Dave has 30 plus years of training experience and is a senior level Instructor in Krav Maga as well as a F.A.S.T Defence Instructor. Dave works the International Seminar circuit and has several years of experience of dealing with violence from working the doors. He is a welcome addition to the UC camp. Dave has a vast experience working with Civilians, Police and Military Units Globally. He runs a monthly UC Workshop in Nottingham where he is based.

Simon Grey is a Third Generation Full UC Instructor. Simon is an ex-Forces Green Jacket, with long background in boxing and Muay Thai. He has been training with Lee for 8 years. Simon is a great instructor with a deep understanding of communication for installing skill sets quickly. Simon is well known for his explosive movement, impact power and his ability to immediately access state. Simon is based in South of England, Salisbury and is currently available for private tuition.

Tom Flint is a Third Generation Full UC Instructor. Tom started training in UC under a First-Generation Instructor Steve Tomkins (now retired) for 3 years before coming to train with Lee. He previously trained within a myriad of martial methods and had a good physical base to start with. Tom has trained with firearms for the last 15 years and is an experienced firearms instructor in both the UK and aboard. He is a graduate of “Gunsite” Jeff Cooper’s legendary firearms school. Tom runs a weekly class in Croydon, Surrey and is available for private tuition, workshops and seminars.

Adam Stratta is a 5th Generation Full UC Instructor. Adam has been training in UC for about 8 years and he is extremely competent in all areas of UC. Adam is currently an assistant instructor for our Wednesday night class and has experience on the international circuit as part of the UC team. Adam is based in the Southampton area and is available for private tuition on request.

Harj Sohal is a Fifth Generation Full UC Instructor. Harj has 10 years of training experience in different martial arts including Filipino Martial Arts, Filipino Boxing and a variety of Self Defence Systems. Harj has been predominately involved at a senior level in Krav Maga for the last 10 yrs running classes in the West Midlands area. Harj runs UC Monthly workshops in the city of BIrmingham.

Lee is now a full UC Instructor. Lee started 25 years ago boxing & moved into kickboxing. Spent a few years competing in amature kickboxing under Trevor Ambrose.. Then move to Krav Maga 4 years ago & passed several ‘gradings’. After hearing about UC & watching UC YouTube posts I made the move for a more realistic form of self protection and been with UC for over 1 year. 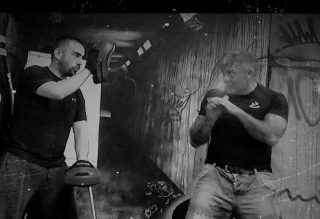 Elliott is an Apprentice Instructor in UC, currently holding grade 2 rank directly from Lee Morrison. But is verse with all things self protection and UC. Elliott has a Bachelor’s degree in Security Consultancy, as well as a foundation degree in Applied Computing. He has been training since the age of 6yrs old in martial methods and combat sports. Elliott is a 1st Dan Black Belt under Geoff Thompson, BCA. A qualified Krav Maga under Itay Gil, Lvl 3 advanced CQC trainer under (Ex) UK SBS special forces CQC trainer and Kings medel recipient. Lvl 3 advanced certificate in security risk management from the security Institute and holds Associate membership (ASyI).
BTEC Lvl 3 Self Defence instructor, use of force and risk management qualifications from NFPS Ltd. Aswell as other qualifications, Elliott considers himself a student, cross training in many systems/methods, but ultimately truly focused on self protection and personal security, due to having been brought up around violence and surviving being shot at, kidernapped, jumped (by multiple assailant’s) and stabbed, which left him having to battle against disability and PTSD. These experiences have fostered a mindset and thirst for knowledge which have only been quenched by UC and has enhanced Elliott into a instructor who is passionate about helping others learn, integrate and apply security practices and assymetrical combative skills.

Andy is an Apprentice UC Instructor, is on the 2019 Instructor Development Programme and is based in Staffordshire.

He has been involved in martial activities for over 30 years, initially starting with traditional karate, then moving into combat sports including thai boxing, western boxing, wrestling, bjj and MMA. He holds coaching qualifications in many of these areas. He is also a British Combat Association Self Protection Instructor, a level 2 Real Combat System Instructor and also a qualified Krav Maga civilian & women’s instructor.

As well as regularly training in Urban Combatives for the past four years, he also continues to cross train in striking arts and grappling and remains active in shooting disciplines.

In addition to being an enthusiastic practitioner of self protection, he gets a real kick from teaching & continuing to learn and firmly believes the old adage of “an instructor always needing to remain a student.”

Andy is currently active as an assistant instructor in UCworkshops in the Midlands and is currently in the process of establishing UC Staffordshire, pending successful completion of the IDP.